Buy the DVD of “Top Priority: The Terror Within” today! 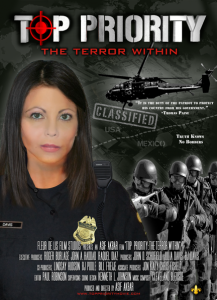 Own a copy of this historical award-winning documentary that dared to expose the truth, in spite of the government censorship and a mainstream media blackout.
Format: DVD NTSC
Price: $19.95
Shipping and handling: $4.50
Region: All Regions (USA, Canada & US Territories)
Run time: 98 minutes
Number of Discs: 1


“When Ms. Davis reported security concerns to the F.B.I. from her post at the Mexican border in July 2004, she was inexplicably labeled a “domestic terrorist” by Homeland Security and, the film claims, subjected to a jaw-dropping campaign of government harassment and intimidation… most shockingly a daylight raid on the Davises’ California home by armed operatives in a Black Hawk helicopter… an impressive hoard of corroborating visual and audio evidence — anchored by taped legal depositions from two creepy government suits.”
-Jeannette Catsoulis, New York Times

“”Top Priority: The Terror Within” reps a flaming indictment of the Dept. of Homeland Security, U.S. Immigration and Customs Enforcement, the Los Angeles Coroner’s Office and even the Screen Actors Guild… “Top Priority” tells the story of Julia Davis, a Ukrainian immigrant-cum-U.S. Customs officer stationed at the San Ysidro border-crossing in San Diego. There, Davis reported a seemingly critical lapse in security that occurred July 4, 2004: Twenty-three citizens of “special-interest countries ” — aka terrorist nations — managed to cross into the United States without the required interrogation or paperwork, at a time when Homeland Security had fixed the Fourth of July as a likely time for an Al Qaeda encore to 9/11. What Davis set off, allegedly, was not a tightening of security or even a search for the 23 dubious visitors, but a desperate bureaucratic effort to avert a PR disaster. That effort led to Davis being declared a terrorist threat, investigations that continued even after she quit her job and her Yucca Valley home was raided by Black Hawk helicopters and a battalion of special federal agents. No one — including the seemingly scurrilous ICE investigators Herbert Kaufer and Jeffrey Deal — denies that the raid took place (the Kaufer-Deal depositions are part of the film’s large archival reservoir).”
-John Anderson, Variety

“Davis, a former Customs and Border Protection officer, discovered and revealed the unlawful entry of 23 illegal aliens from unfriendly countries into the United States and was promptly forced to resign, had her home raided, and was made the subject of as many as 54 separate federal investigations… Top Priority makes its strongest points, most of them relating to absurdities carried out under the guise of the Patriot Act… This is a story worth telling.”
-Michael Nordine, The Village Voice

“I summed my review up in one word. Wow!”
-Mike Smith, Media Mikes

“Top Priority: The Terror Within” will have great impact, because it will encourage others to fight against the evil forces inside our government, which is unquestionably a Patriotic endeavor.”
-Emmy Award winner Leslie Dutton, The Full Disclosure Network

“Top Priority: The Terror Within” is an award-winning documentary film by Fleur De Lis Film Studios. It features an incredible true story of Julia Davis, a national security whistleblower who was falsely declared a “Domestic Terrorist” and subjected to retaliation of unprecedented proportions by the Department of Homeland Security.

In spite of being extensively litigated and mentioned in a book, “Unsafe At Any Altitude”, these sensational events were suppressed from being covered by the mainstream media – until now. The truth is no longer a secret.

“Top Priority: The Terror Within” explores issues that have sparked nationwide controversy such as the USA PATRIOT Act and illegal tactics improperly used against law-abiding 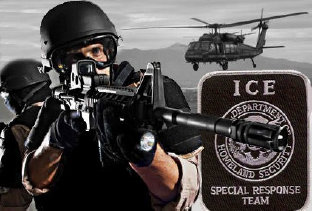 Americans under the guise of “the war on terror”. Julia Davis, a former federal officer with the Department of Homeland Security, discovered and reported a breach of national security at the largest and busiest land border crossing in the U.S. on 4th of July, 2004. When the DHS failed to act on her reports, she took her concerns to the FBI/JTTF. 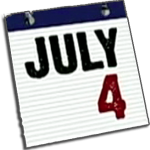 Numerous intelligence alerts designated Independence Day as the “date to watch” of special importance. Files found within Osama Bin Laden’s compound in 2011 confirmed that the 4th of July was in fact a date of planned terrorist attacks on the United States. The DHS was quick to close Julia Davis’ reports with “no action” and without any investigation.

Instead of correcting the shortcomings exposed by Julia’s report, prompted by the heads 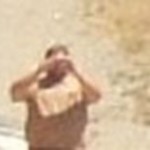 of the Agency in Washington, DC, the Department of Homeland Security started to investigate her. They’ve opened a total of 54 investigations against Julia Davis. The Department of Homeland Security is notorious for its brutal retaliatory tactics against courageous whistleblowers. Julia Davis was falsely accused of being a “Domestic Terrorist” and an “illegal alien” in an attempt by DHS/ICE to deport and denaturalize her. The agency falsely claimed that Julia served in the Russian Army and was a convicted murderer. 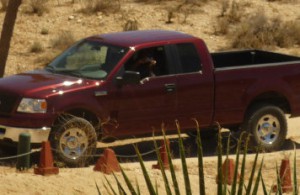 The documentary details unprecedented magnitude of retaliation and abuses of the PATRIOT Act in the case of Julia Davis. It will show American taxpayers how the DHS spent their money on warrantless surveillance, including aerial surveillance with a Blackhawk helicopter and a fixed-wing airplane, wiretaps, Internet monitoring and On-Star tracking of the Davis family. 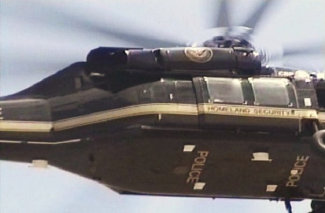 “Top Priority: The Terror Within” is jam-packed with actual footage of the Blackhawk helicopter/Special Response Team raid of the Davis residence, videotaped accounts of witnesses and perpetrators as well as extensive evidence obtained from court records. More SRT agents were utilized to attack Julia Davis than the number of US Navy SEALS on the ground during the assault of Osama Bin Laden’s compound in Pakistan. The warrantless search of the Davis home lasted much longer than the search of Bin Laden’s lair.

“Top Priority: The Terror Within” strives to ensure that such unconstitutional atrocities aren’t perpetrated against anyone else.